Most of the artists collected have had limited exposure to western art markets and museums. While many of the artists had formal fine arts training, others are self taught. Yet they have all created their visions in their own domestic environments, and are recognized locally as important and influential artists. Some have led influential art movements (Dang Xuan Hoa, Gang of Five, Vietnam) while others are recognized as national artists (Bui Xuan Phai, Vietnam; Svay Ken, Cambodia; Mariano Gonzalez Chavajay, Guatemala; E.S. Tingatinga, Tanzania.) As such, one intent of this web site is to expose their artistic ideas and achievements to a wider audience. Additionally, the site serves as a research tool for scholars, curators and museums interested in these developing country’s contemporary art movements. The works are not for sale, but inclusion in exhibitions, catalogs or research projects will be considered.

​Looking back, my art collection is really quite broad in artistic styles and sensibilities. But if there are two persevering qualities that unite the collection it is these:
- it is culled and conceived from a personal perspective, but with a global reach
- it was borne from the turn of the century, namely 1995-2005

Following the arch of my world travels, this collection is at once intimate and personal, yet also parallels the larger phenomena of globalization at the turn of the century. Oscillating between the bonds and rifts of the local and the global, both universal and culturally specific themes, rituals and identities are examined. Universal themes such as human relationships, political strife, alienation, identity and happiness are examined within and without cultural context. How is the essence of family life depicted in a north Vietnamese artwork versus one from the Guatemalan highlands? Are abstract works universal in meaning? Is cultural context a necessity or a hinderance in viewing abstract art ? (Hint: it is both.) My hope is that by sharing this collection online viewers can glimpse into these worlds while also creating their own narratives.
​
​About

​Amit May is principal and proprietor of May Properties, which owns and operates condominiums and boutique apartment buildings in the Mission District of San Francisco- one of the city’s most culturally diverse and arts rich neighborhoods. He is a graduate of the University of California at Berkeley. He and his wife divide their time between San Francisco/USA, Puerto Vallarta/Mexico and Tel Aviv/Israel. 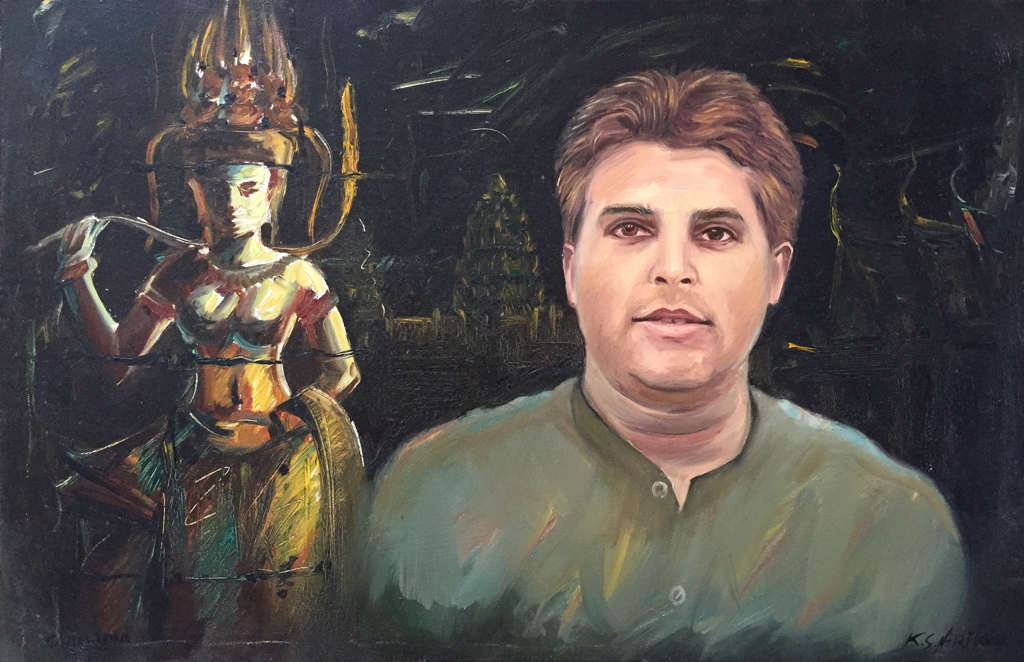 Kimsong Narikun, Portrait of Amit within the Cambodian Arts, 1997, Cambodia